I've worn fitness trackers for the better part of a few years which goes back to the original Jawbone UP. Since then I've upgraded to the UP24 followed by the UP3, and have now switched to the Garmin VivoSmart HR+. In the "before now" I was happy with the UP line of fitness trackers by Jawbone, sadly the UP3 brought with it sadness and pain, but mostly just pain. The device tried to do a lot and it tried to do it with smart technology along with capable engineering, sadly it missed on almost all marks. The UP3 was a beautiful disaster, it promised the moon and delivered a cockroach.

Being cheap, I tried to stay with my UP3 for as long they'd let me, despite the sensor imprints it left behind.

In fact, I went through three warranty replacements:

Every time I've dealt with Jawbone support they were great. They helped me get my replacement UP3 units and they get them to me in a reasonable amount of time. Sadly my last UP3 suffered the same fate as it's predecessor, it has decided that recharging the battery was not something it cared for any longer.

With the death of my final UP3 at hand, and because my warranty period was over, I decided it was time to venture forth and move on to a different provider. I knew I wanted something newer and I knew I wanted something a little more capable than my untrustworthy UP3. After comparing the Fitbit, Garmin, Microsoft, Samsung, and Xiaomi I decided to go with Garmin on the recommendation of a colleague. Basically, it came down to good past results and capable customer service which Garmin has both in spades.

It took me a good couple of days to decided on the lineup I wanted. Garmin has a bunch of products all of which fill similar needs in terms of fitness tracking but each series has unique characteristics and price-points. In the end, I landed on the "Vivo" line due to it being square in the middle of the Garmin wearable product line-up, which means it's a good price for a well-rounded product.

The Vivo product lineup from Garmin is not very dense and is not hard to understand. Each unit has pluses and minus compared to the unit next to it and Garmin does a good job of breaking down the specifications of each unit in a way humans can understand it. Being that I simply needed a fitness tracker to keep me aware of my laziness and to mock me when I miss my goals I chose the VivoSmart HR+, which is the top of the line Vivo fitness tracker. This unit is capable of monitoring my heart rate, steps, elevation, sleep, and physical activity all while mocking my lack of accomplishments by telling me I need to move more.

The specs on this little guy are great. It boasts an eight-day battery life and a whole host of features I'll likely never use. It also is capable of notifications and reminders when synced to a smartphone, which effectively labels this unit as a "smartwatch". To be perfectly honest, this is no smartwatch. The VivoSmart HR+ is a fitness tracker with smartwatch capabilities, which makes it better than some stupid fruit watch or a living band from a far away universe that isn't waterproof and won't even last a full day on a charge.

Here are a few pics of the unit's face and underbelly. 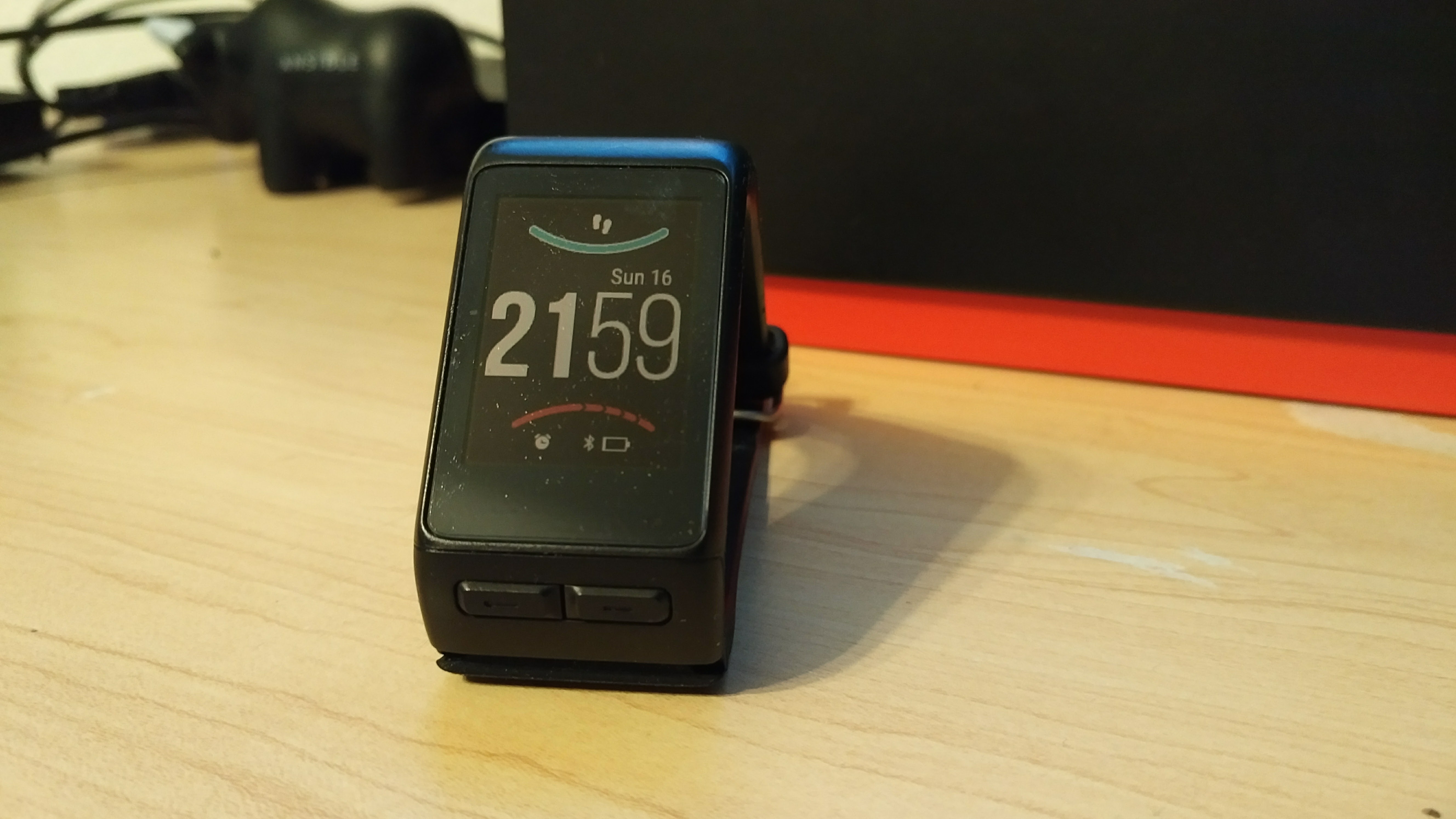 On the underbelly, you'll notice a nub. This little nub is the heart rate tracker and it works quite well and hasn't become uncomfortable or left any residual damage. 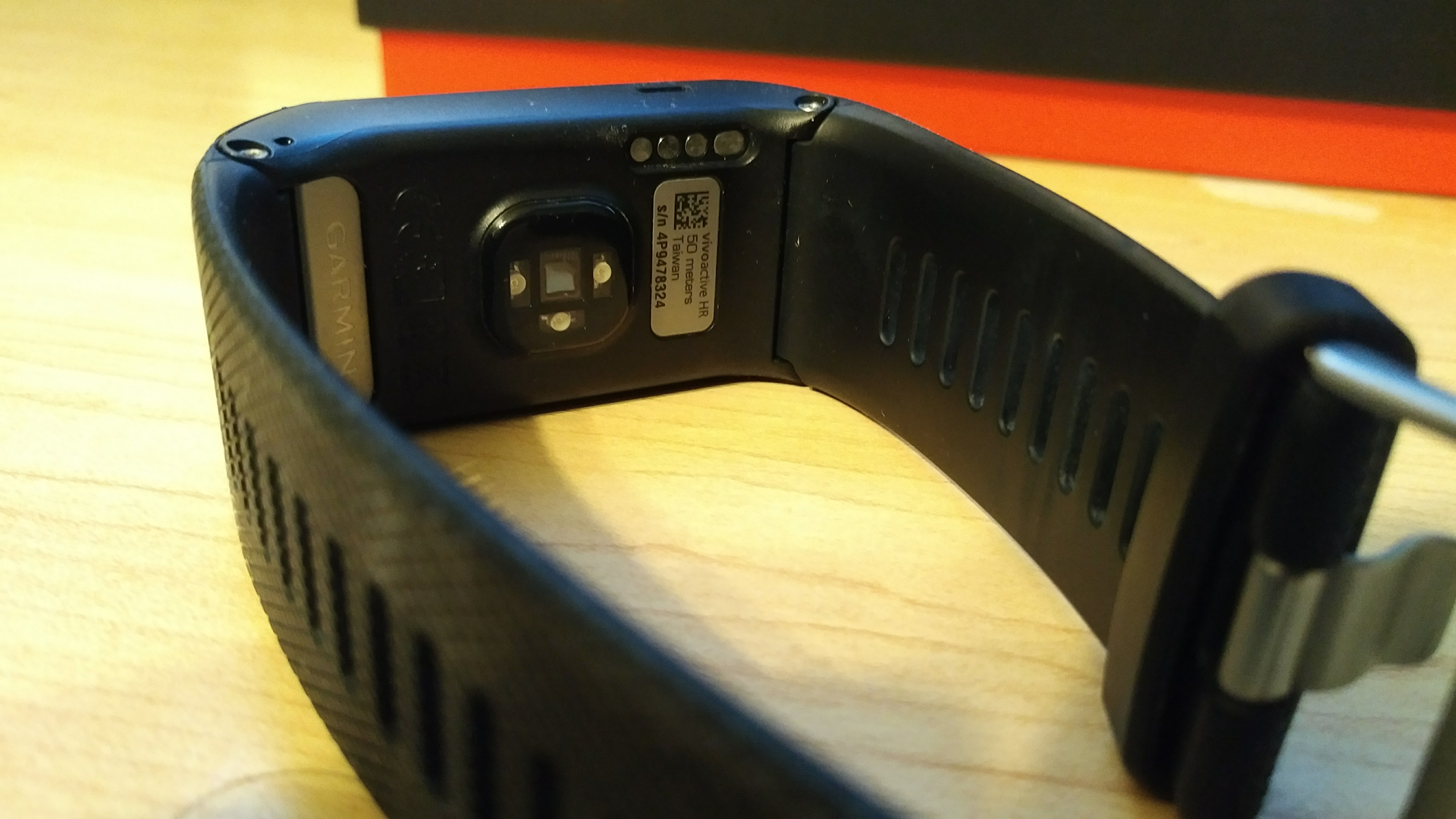 So far I've been amazed by the VivoSmart HR+'s ability sustain battery life. My old UP3 advertised a Seven-day battery life, however it reality it was always more like 4-5 days max. The VivoSmart HR+ says it has an 8 Day battery life but in my initial two week test the unit ran non-stop for 12.5 Days and I only decided to charge it because it was at 9% battery and I wanted to write this blog post (I bet I could have pushed it to a full two weeks). 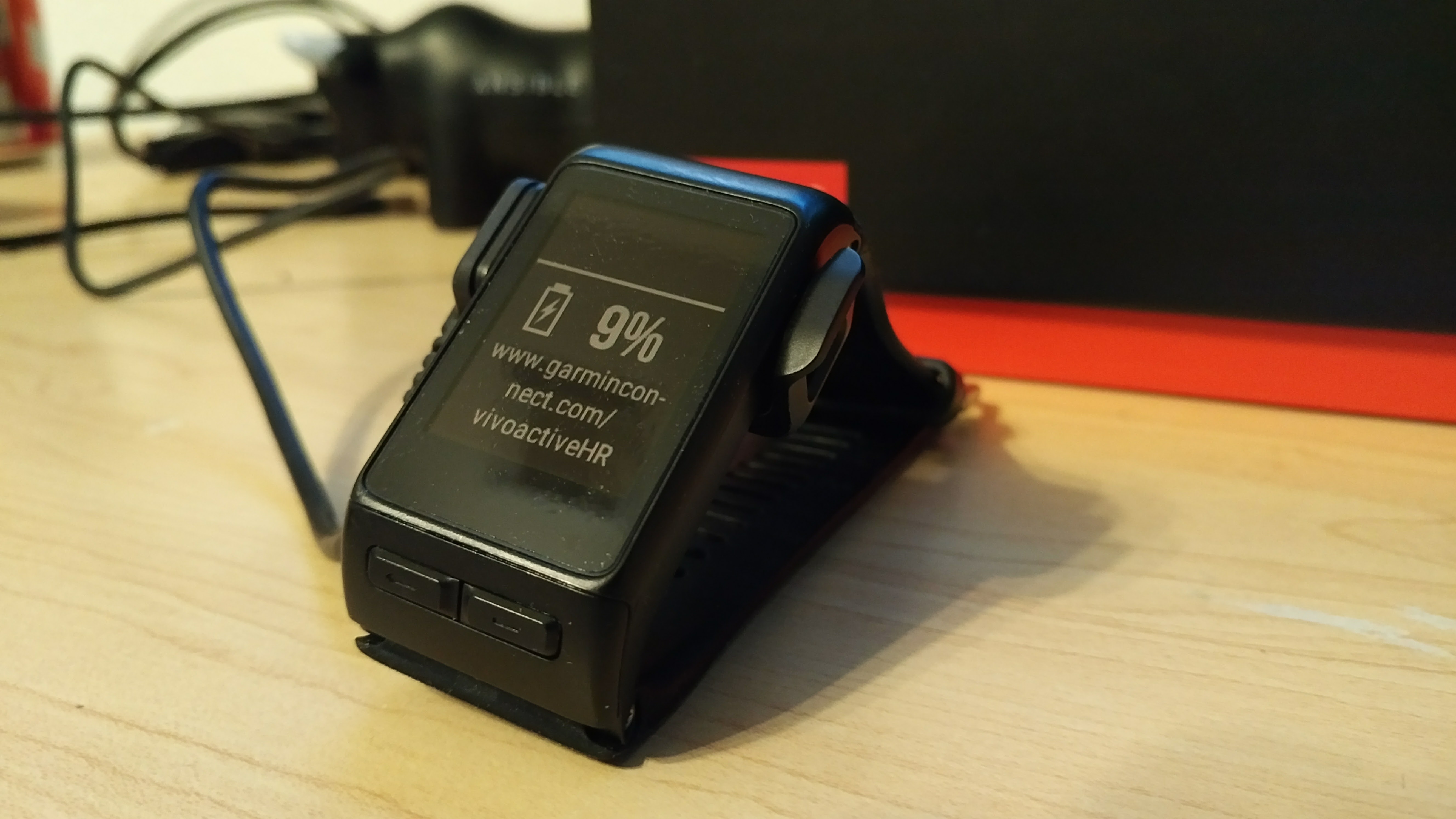 When it did come time to charge the unit it only took about an hour to reach 100%, which was another fantastic feature over my multi-hour charging UP3.

In wearing the VivoSmart HR+ I've found it to be quite comfortable throughout all parts of the day. Even when I'm actual doing something,
not at a computer, I hardly notice the band and have enjoyed wearing it. Here's the VivoSmart HR+ in its natural habitat, on my wrist in front of a computer.

As for the fitness tracking, the unit does great. The on-screen output covering what I've done is helpful at a glance and a quick swipe through the VivoSmart HR+'s panels reveal even more metrics. To get the detailed information you need to use an Application on your phone or computer.

I've read quite a few reviews from folks basically saying that the Garmin Connect mobile application is trash, however, I quite like it. It's simple, it contains everything I need, and it's easy to navigate.

The home screen tells me how little I've done in a day and how little I've slept the previous night. It also provides elevation details in the terms of floors climbed, which I find cool. 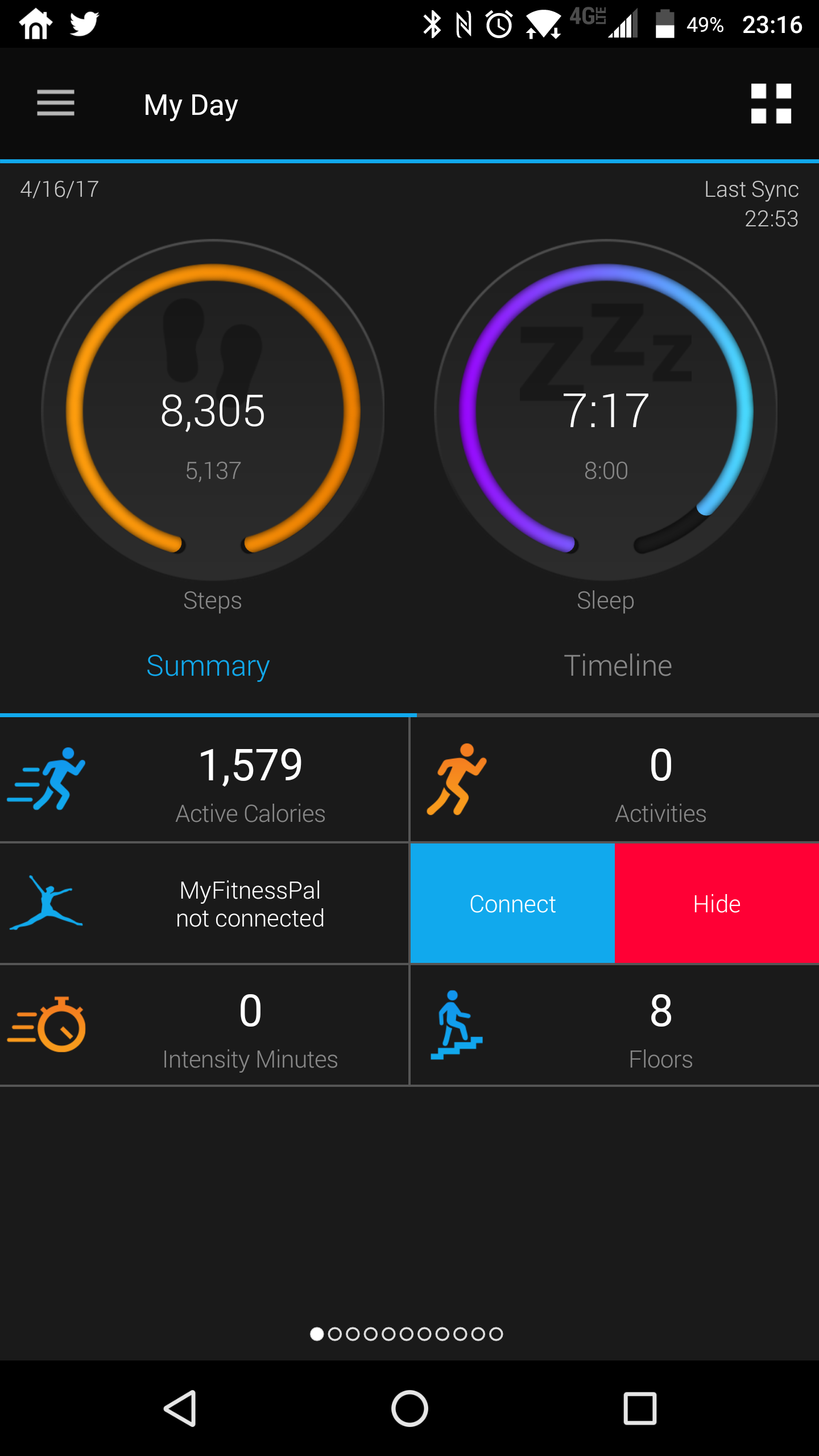 Within the application, I can also setup some user specific settings and change settings on my device.

Once you start exploring around you'll find all sorts of metrics this little wonder is collecting. Here are a few screenshots from my poking around. 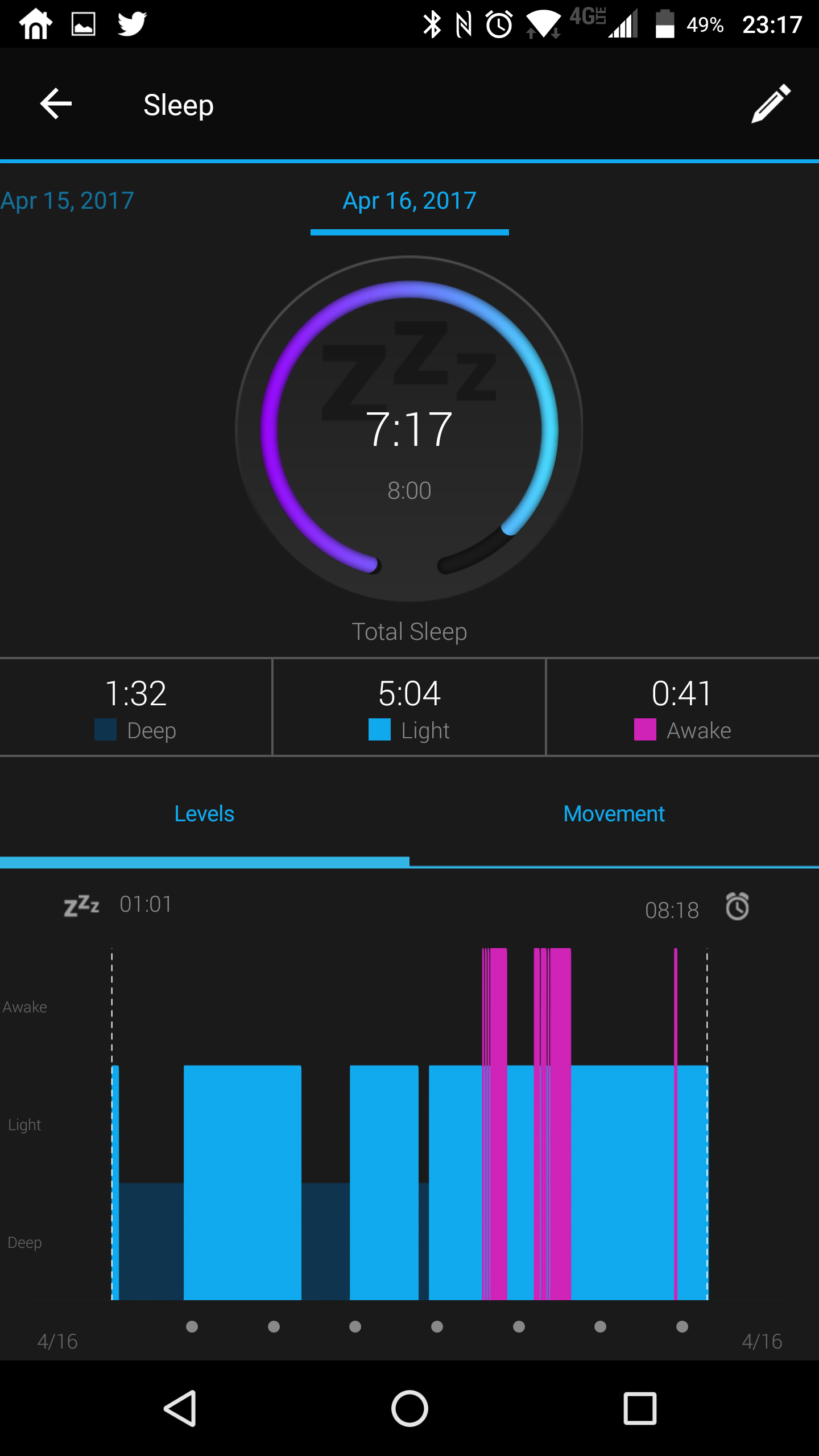 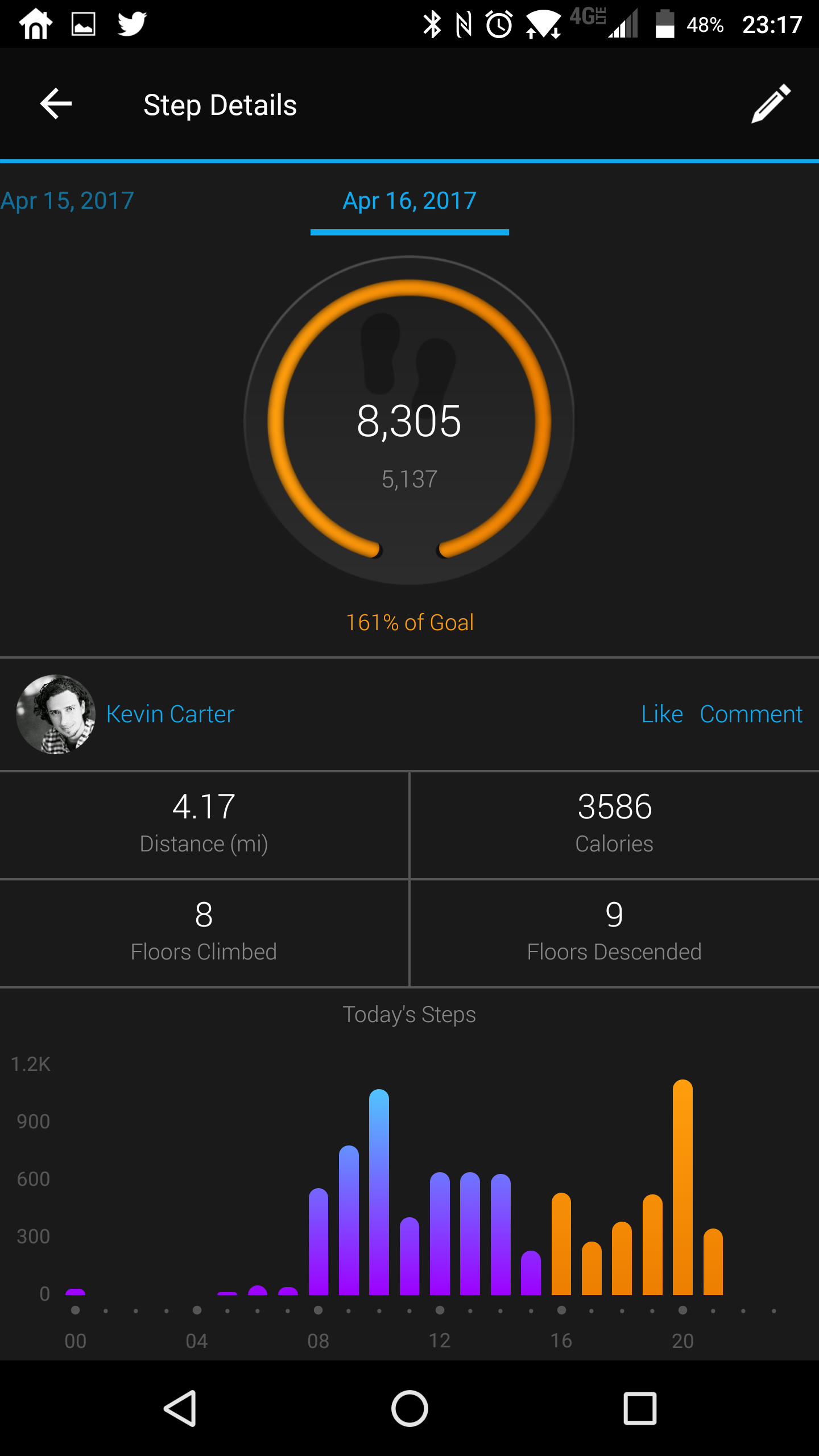 The Garmin VivoSmart HR+ is fantastic. It's comfortable, it's intelligent, It has great technology, and it has an impressive battery life. If you're in need of a fitness tracker at a great price that isn't going to leave square indentations in your wrist, get the VivoSmart HR+, you'll be happy you didn't choose the more painful option.